One day, I woke up and decided I wasn’t going to be creative anymore. I had been working long and hard to bring an illustration project to fruition, and it was about to be published, yet somehow, I felt … flat. Where was the exhilaration I was supposed to be experiencing? I was finally being published by a large company. I should be excited, but I wasn’t. Could it be that creativity wasn’t enough? So, I decided maybe it wasn’t, and I turned away from my sketchbooks and pens to eventually focus on more left-brain work, getting a job at our local university business school.

Gradually, I realized that it was true, creativity does exist and is respected in the business world… especially if it gets results.

As an arts graduate, I was now surrounded by business-focused people. To be fair, I was in an area researching entrepreneurs, but it was still a very different world for me. I watched and listened, hearing a whole new vocabulary.

Quite often, there was one word that seemed to be very important, results.

I wasn’t quite sure exactly what that meant at first, but it sounded to me like working hard towards a goal, and then getting there. I liked the purposeful sound of that. It made sense to my newly focused logical side. I was hooked.

It wasn’t too long after that when I started hearing another word sprinkled throughout conversations, innovation.

What was this about, I wondered? It had a vaguely familiar feel. Could it be? That other side of me that I was trying to leave behind, is here as well? Could innovation be a different word for creativity? Having only seen business from the outside in, I started to puzzle on this new word. Gradually, I realized that it was true, creativity does exist and is respected in the business world…especially if it gets results. Here was a world where you could be both creative and left-brained. I was sold. I wanted to know everything I could learn.

Absorbing as much as I could about business, I found myself gradually drawn to a different kind of course on campus that I wanted to audit; this time about grief.

It shouldn’t have been a surprise then, that as the evening wore on, my note taking gradually took on a more artistic form…especially one evening.

On that first evening, I was pretty nervous, but my thirst for new information was stronger than my fear, so I took courage in hand and entered the classroom, finding a seat as far to the back as I could. Seeing that not everyone had arrived yet (and not one to sit idle) I dug around in my purse for something to write on. Way down at the bottom, I found a pen and my trusted sketchbook. Maybe out of habit, or just not to look as out of place as I felt, it felt better to have those items at hand, even though I knew as an adult student auditing, I didn’t have to take notes and could simply relax and listen. It shouldn’t have been a surprise then, that as the evening wore on, my note taking gradually took on a more artistic form…especially one evening.

No Longer A Pattern

I’ve been doodling to help me listen for years. Some people knit during lectures; I draw. Or specifically, I usually create free-form squiggles that gradually emerge into patterns. I seem to turn one side of my brain to the course material, and the other to imagination and intuition. So that night, my small sketchbook open, I let my hand flow across the page and draw whatever it wanted. This time, I looked down to see the usual swirls were starting to change. They were no longer forming just a pattern. This time something new showed up – an actual scene.

First there were some clouds…then a ladder leading to the clouds.

The next week, it happened again!

Only this time…something new. A Christmas tree!

Here, in the pages of my sketchbook was a quiet, safe place.

As my hand moved across the page, the tree gradually emerged with repeating stars, leaves, berries, and swirls…a fully-fledged Christmas tree complete with decorations!

What’s more, I felt a sense of calm and joy.

Here, in the pages of my sketchbook was a quiet, safe place.

Why would something as joyful as a Christmas tree emerge, of all places, during a lecture on grief. Not only that, during a course on grieving? It’s not an easy topic, and not one you’d naturally think of as connected to something as cheerful as a decorated Christmas tree. Yet, there it was. A magical little place, right inside of those pages.

I’m sure the Christmas season was an influence. It was coming close and at the time I always designed my own custom Christmas cards, because even though I’d decided I wasn’t creative, it kept seeping out of me whether I wanted it to or not.

It was as if I needed to be part of that calm setting.

When I first decided to take the grief course, I had experienced grief, but not recently. I was prepared to learn this time around, more as an academic exercise. I was not prepared for the fact that my life would be touched by grief again that semester. Not of someone I was terribly close to, but this time someone young. Someone I saw weekly. My naturopath was suddenly one day…gone.

I hadn’t been drawing for some time. Doodling sure, but an actual scene? No. Could shock and sadness have pushed me back into my drawing? Possibly. It was as if I needed to be part of that calm setting. The bonus was that the actual act of drawing the tree felt soothing, like creating order out of chaos.

Somewhere along the way something good had emerged. I stopped setting aside my creative side, and let it begin growing again.

As I walked into the last evening class, there was one last thing I had to do. All of the students in class were asked to share their own stories of grief at some point. Remember, initially I’d had nothing recent to talk about, but now I did. In fact, I had two things to talk about.

When my turn finally came, I went to the front of the class, sketchbook in hand. Actually, I don’t remember much of what I said, it’s a bit of a blur, but I do, however,  remember sharing about the loss of my naturopath first, and then shared how I hadn’t been drawing in a while … and it had all started again during that class.

Somewhere along the way something good had emerged. I stopped setting aside my creative side, and let it begin growing again. Was it because, or maybe despite, or as a result, of grief? Whatever the case, for me, at that time, creativity emerged during a difficult time, and in the most unlikely of places.

Turning a Sketch into a Drawing

Several years later when I needed inspiration for my annual Christmas card, I returned to that sketch again. How I still enjoyed looking at that quiet moment.

This time around I pulled out my pencil, pen and paper and started to translate the little sketch into a larger drawing. After roughly sketching an outline out in pencil, I began inking it in by hand: one star, berry, leaf, and swirl at a time. Once again, as my hand moved over the paper, I let go and allowed the drawing to take me into a quiet place…and once again…it did.

More than a Drawing

It’s been over 10 years since that first sketch. This year I’ve returned to it once more, this time digitizing the hand drawing. I still feel that initial calm when I look at it. To me, it’s more than just a drawing of a tree, it’s a mentally quiet, safe place.

Now, to be sure, my experience with grief back then hurt, but I cannot compare it to the heart-wrenching grief so many have experienced over the last months losing loved ones to Covid. Creativity may or may not emerge during that type of anguish, and I’m no expert on grief (although I have had my fair share since that initial sketch). I just know that creativity came back to life for me during that sad time. Even more surprising, it happened while taking a course that I’d never would have thought could inspire creativity or a Christmas tree drawing that mentally transported me to a quiet place when I needed it most. 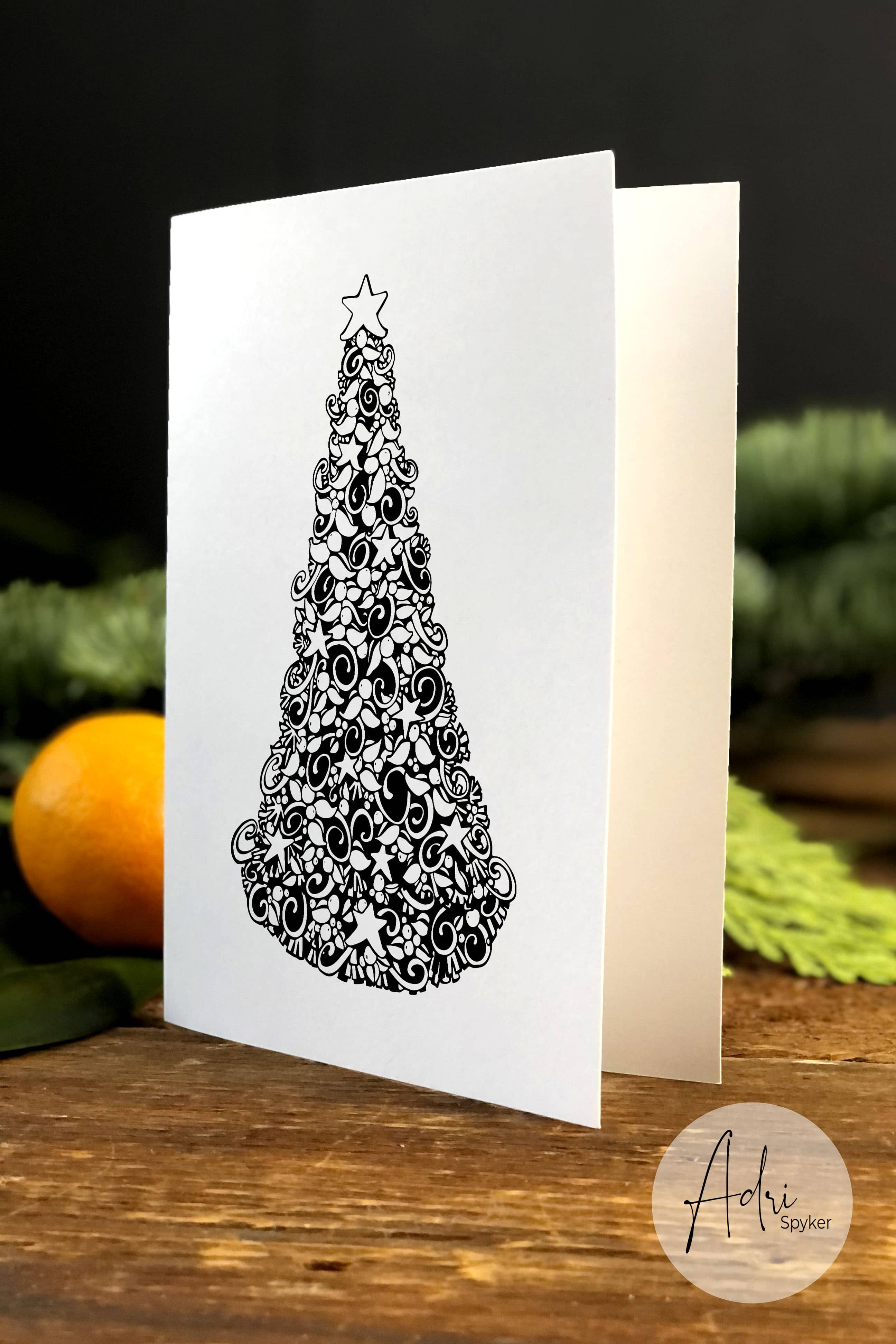